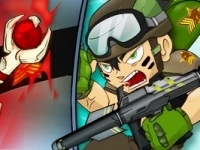 You must defend the earth against invading creatures coming from other worlds. They have started to invade earth and destroy all human being. The last hope...: the new big canon: ALPHA DESTRUCTOR 1. A powerfull weapon that should destroy the invaders, and end that war... But this weapon is not finished yet. You must protect ALPHA DESTRUCTOR 1 from the invaders Army of Soldiers Worlds War is a great game that you can play for free at in friv3000.com. Regardless Army of Soldiers Worlds War game, we provide many cool Friv 3000 games to play for free.

Use Left Mouse button to Play